Posted on December 12, 2015 by Laomagination Media

Although highly anticipated, the December 20th staged reading of Lao American playwright Saymoukda Duangphouxay Vongsay‘s Kung Fu Zombies vs. Shaman Warrior has been postponed to a later date in 2016.

This should give the team at Refugenius Productions sufficient time to make additional updates to the script, which is a further installment to her “Kung Fu Zombiverse” live theater series.

Working again with a post-apocalyptic setting, the core themes that will be explored include refugee mental health, post-traumatic stress disorder, and questions of spirituality, destiny and post-colonial readings of global history, particularly Southeast Asian shamanism. At least one other play set in the “Kung Fu Zombieverse” is anticipated.

It will be interesting to see where she takes her audience, drawing on her experience with the State Council on Asian Pacific Minnesotans to produce “Absent Narratives: Prayers on the Prairie,” a video looking at the diversity of spiritual traditions in the Asian Pacific American community in Minnesota, including those of the Hmong and Lao. 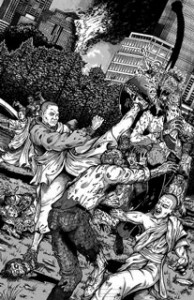 The original Kung Fu Zombies vs. Cannibals that started this series was a sprawling opus by Duangphouxay Vongsay incorporating many of her core concerns regarding the Southeast Asian diaspora in 2013. At many points, it was a rough, raw production that at turns hit the audience like a sledgehammer an other times had the subtle complexities of a good padaek. In the interceding years, she’s grown as an artist, and early previews suggest this will be a logical progression in her theatrical journey.

Focused on a mission to develop a body of multicultural, multimedia resources that meets the needs of Lao Americans and their friends and families interested in the speculative arts, whether it’s science fiction, fantasy, horror or other artistic genres engaging the Lao imagination and heritage.
View all posts by Laomagination Media →
This entry was posted in Uncategorized. Bookmark the permalink.